Myth #13: The order in which you blend the oils in an aromatherapy blend changes the chemistry and the odor of the blend and makes a difference therapeutically.

For the chemistry of a blend to be different depending on the order of the mixed ingredients there would have to be chemical reactions taking place at each stage of the blending to cause such differences. But since most essential oils contain components that are common to many different oils, gladly this is not typically a possibility under normal conditions. Think about it, if these reactions occurred upon mixing different oils then one would also expect to see the molecules within a single oil reacting with each other, under normal conditions, in very short periods of time as well. Wouldn't that be a tragedy!

The truth is that as long as you are mixing each oil in the EXACT same percentage in each trial, the order of blending each component would almost never reveal a significant effect. When people do claim to notice differences in blends based on order of component addition, its typically because they do not have the ability to conduct the experiment with quantitative accuracy. For example, it would not be a scientific experiment to do various blends using drops of essential oil from orifice reducer bottles or even by counting drops from a pipette. The reason being that drops are often drastically inconsistent, even when using the same oil with the same dropper. The only way to accurately put together the blends is to use a digital scale, I recommend one that can weigh out to at least 0.001 gram. If all the components are added to blend in the exactly the same amount each time the blend is made and the components mixed thoroughly then the odor and chemistry should be identical each time, regardless of order they were added to the blend.

This is not to say that its impossible for blending order not to play a role in differences in the blend if the blend is done under unusual circumstances. For example, if you add ingredients A and B together and let it set for days then add in ingredient C you could very well perceive some odor differences compared to doing the same blend in reverse order because you have given the blend some time in between adding ingredients for very minor chemical reactions to occur, maybe some oxidation etc. could also be a factor. But even under this scenario, the chemical makeup on the GC will be almost identical even though very minor reactions could have occurred to affect minor aspects of the odor. In most cases, when people are just blending at home, a few oils in a matter of a few minutes, the order of blending will not matter at all, assuming you have the ability to be consistent in each ingredient during each trial. But since most people don't have digital scales, they will most likely see differences in the same blend from trial to trial, even if they ALWAYS blend the oils in the exact same order. This is just due to the inaccuracies of formulating with drops.

Just to prove the point experimentally, I did a quick experiment and documented it by video. In the experiment we blended 3 oils (Frankincense, Lavender and Tea Tree) in different order, but using the same amounts by weight each time and then analyzing each blend by GC/MS and showing that the blend is chemically identical in each trial. The results below are from two different trials (out of the 6 total possibilities) where you can clearly see that the chemical composition of each blend is the same (within the error of the instrument, I could literally run the exact same sample twice on the same instrument and get the same small differences in the percentages as shown for these two trials). The final picture shows a blown up region of the chromatographs superimposed on one another showing that all the peaks line up exactly in each trial. The odor of each blend was also identical.

For some fun we did the following short youtube video summarizing the experiment. The next time someone tries to tell you that the order of blending matters just send them this video link. Enjoy! https://www.youtube.com/watch?v=18cU7G63je4 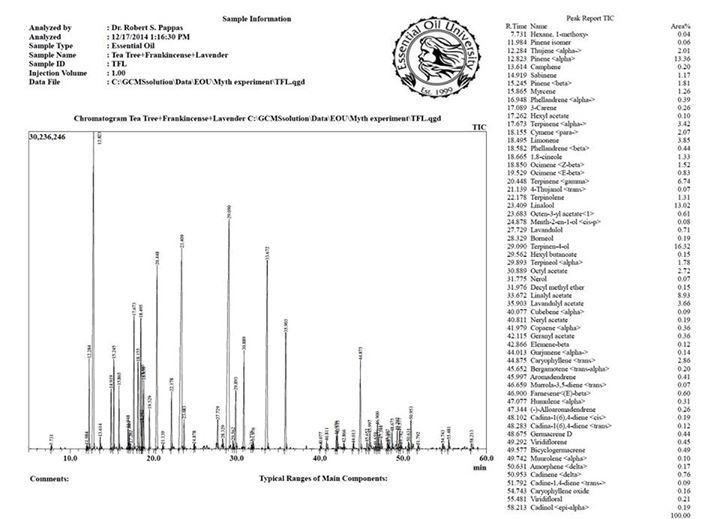